The couple married in 2013 in Lagos after a report had it that she got married secretly in South Africa.

Ajaba had a relationship with 2Baba before she married Pastor Adeoye. Her romance with Benue State born star produced two beautiful kids. 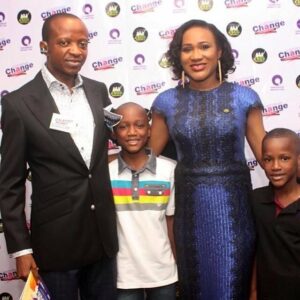 Sunmbo, and her husband, Pastor Adeoye, this morning, welcomed a baby girl  in the U.S.
This will be Sumbo’s fourth child and Pastor David Adeoye’s second child.

“Rejoice with use, our princess is here… To God be the glory”.

Sunmbo Ajaba-Adeoye who was the first woman to have 2face’s kids, has two boys named Zino and Nino Idibia. Sunmbo is the owner of an event company called Esob.